Researchers have now identified more than 50 genes which they associate with lupus. These genes are more commonly seen in people with lupus than in those without the disease, and while most of these genes have not been shown to cause lupus, they are believed to contribute to it. 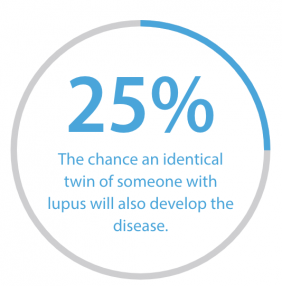 In most cases, genes are not enough.  This is especially evident with twins who are raised in the same environment and have the same inherited features yet only one develops lupus. Although, when one of two identical twins has lupus, there is an increased chance that the other twin will also develop the disease (30% percent chance for identical twins; 5-10% percent chance for fraternal twins).